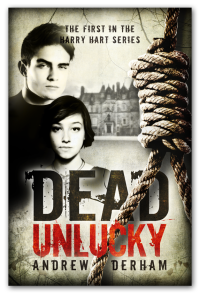 Harry Hart had prepared himself for a depressing evening, and he would have settled for that. But the moment his boss posed his simple question it began a journey that travelled from merely wretched to absolutely dreadful, via the unlikely road of farce.

‘What can I tempt you with for a starter, Harry?’ really shouldn’t have constituted the trickiest of queries. ‘The shrimps baked in phyllo are exceptionally good here, the spaghetti frutti di mare delicious, and the fried calamari with aioli sauce a specialty of the house, the finest outside of London. We really are spoilt for choice.’

Chief Superintendent Claude Rodgers was certainly proud of his own choice of the seafood restaurant and his pride was lavishly displayed for all to see. And, to be fair to him, it was indeed a rather grand venue, boasting its lacy napkins, fawning waiters and suitably salmon-hued walls.

‘Well they all sound splendid, absolutely marvellous, but I’ll have a bit of squid if there’s any on the menu. I know it’s not everybody’s cup of tea but maybe it’ll remind me to change the ink in my printer when I get back to the office.’ Hart hoped his dinner companions would at least indulge him by smiling politely at his naff little quip, but they couldn’t even manage that. Fair enough, he would have struggled to raise a charitable grin himself.

‘So it’s to be the calamari then, is it? Fine choice, Harry, fine choice.’

‘Actually, I’ll stick with the squid if that’s okay. I’m not so keen on anything too rich, I think it disagrees with me a bit, has a habit of upsetting the ol’ stomach, it does.’ And Harry unhooked his left thumb from the waistband of his trousers and patted the delicate organ to emphasise its frailty. And then he started to sweat; he would have felt more comfortable sitting naked in a pit of cantankerous scorpions than in this swanky place with these fancy folks.

‘Okay, Harry, squid it is,’ sighed Rodgers, trying to make the best of it. ‘But no smothering it with the mountain of horseradish sauce that you usually pile on to bury your food,’ he added, trying to manufacture a joke but actually managing to add to his guest’s embarrassment.

Peeking over her reading glasses, Mrs Rodgers stared at Chief Inspector Harry Hart with a blend of suspicion and disbelief, like she was perusing a being that had just stepped off a spaceship. The fourth member of the quartet was Patricia Luft, and her green eyes didn’t glance at Hart at all but continued the study of her menu with an unbroken concentration which suggested she had not even heard the policemen’s peculiar conversation, and Hart silently thanked her for her kindness.

A moment after the stooping waiter had walked away with their order, respite from purgatory arrived in the form of Jingle Bells ringing out on Hart’s mobile phone, a melody temporarily installed to replace Beethoven’s Fifth as a gesture to welcome the approaching festive season. And about ruddy time, he thought as he pulled the phone from his jacket pocket with a shrug of his shoulders and an apologetic smile all round.

‘Uh huh. Yes, Sergeant Redpath, I’ve got that. Oh dear, that does sound bad,’ he hammed for the benefit of his audience at the table. ‘I’ll be over right away. It’s such a disappointment, as I’ve only just sat down to dinner with the Chief Superintendent and some charming company. No, Sergeant, I was not suggesting that the Chief Superintendent isn’t charming company. Don’t try and be clever, it doesn’t suit you.’ And he dismissed Sergeant Redpath by cutting off the call.

‘I’m so sorry ladies, Sir. I hope you’ll understand that something urgent’s come up and I’ll have to be leaving right away. As the old song goes, When constabulary duty’s to be done, a policeman’s lot is not an ’appy one.’ But, in truth, the imperfectly stifled sigh of relief squeezing itself through Chief Inspector Hart’s lips suggested he wasn’t actually too un’appy to be rising from the dinner table.

His superior glared at him as though he were being insolent and deliberately awkward by walking out on them just so he could pursue pressing police work when he should actually be lingering to admire his boss’s generosity. Mrs Rodgers was doubtful – it all seemed a touch too neat having to disappear like that and she thought Harry Hart wasn’t above pulling a fast one. Patricia Luft’s raised eyebrows and wan smile told of her genuine disappointment that he was leaving.

Relieved to be hurrying out of the place and away from a situation which demanded the deployment of a multitude of social graces he knew he could never muster, Hart was prodding the display on his mobile the moment his shoe hit the pavement.

‘I told you to ring me at seven sharp and it’s gone a quarter past,’ he chastened Redpath. ‘And a murder! A ruddy murder, I ask you! You could have come up with something more imaginative than that, Darren. One little favour is all I wanted and it’s too much trouble for you to put a bit of thought into it. Suppose the Chief had happened to enquire about the nature of the momentous duty that had me scurrying off to leave him, his lovely wife and that Mrs Luft deprived of my scintillating company and stranded as a threesome? How would I have explained to him in the morning that it wasn’t actually a murder after all, Sir, it turned out to be a flasher in the park and that blundering Redpath got the felony confused with a brutal killing in an alley? Shame about missing the dinner you splashed out a fortune on just because of a false alarm.’

At last Redpath got a word in.

‘But it is a murder. You can’t seriously think I’d fritter away my evening off by spending it on the phone just to help you bale out of the Chief’s matchmaking ceremony. There’s a corpse lying in an alley off Green Drive with its head caved in.’

A pause waited in the chilly air while Hart processed the news.

‘Right. I’ll make it there as soon as I can, in about half an hour I expect. And by the way, Darren.’

‘Just a fancy name for squid.’

Hart winced as he pondered why the cloying atmosphere of a posh restaurant should have conspired with the presence of the pretty Mrs Luft to compel his wits to fly out the window. ‘I had a feeling you’d say that.’

Hart was none too chuffed with his bungling performance in the restaurant. But he would have been a darn sight more put out if he had known his bizarre conversation with the Chief would come close to killing him.